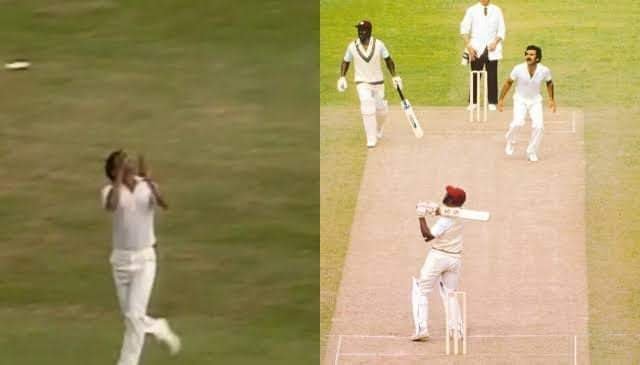 Vivian Richards looked in ominous touch racing to 33 with seven 4’s. At 50 for 1, chasing 184 for victory, West Indies seemed to be cruising. India had no answers.

It was then that Desmond Haynes holed out to Binny at cover off Madan Lal. Then came the famous wicket — the wicket that has been televised, and viewed at least a million times by Indian viewers. Madan Lal pitched one slightly short outside off-stump, and Richards tried to pull it. However, the ball rose a bit higher than expected, and the top edge flew towards deep mid-wicket. Kapil ran back a long distance, kept his eyes on the ball for a long time and completed the catch close to the boundary. It was a crucial moment in the game and the Indian captain showed magnificent athleticism, judgement and composure to hang on to the ball. Running backwards and maintaining balance under the ball is not the easiest of skills by any means. Time stopped in complete disbelief ; King Richards had fallen. Kapil Dev took probably the most famous catch in the history of Indian cricket. Later when asked about the catch he took, Kapil underplayed the effort and said, “That’s what we were told to do by our coaches — when running back, try to take the catch sideways.

𝑽𝒊𝒗𝒊𝒂𝒏 𝑹𝒊𝒄𝒉𝒂𝒓𝒅𝒔 — “I still don’t know from where did he (Kapil) come to take that catch. When Kapil was running back waving to the nearest fielder to get out of his way, I knew my time was over.”

𝑲𝒂𝒑𝒊𝒍 𝑫𝒆𝒗 — “Richards swung at Madan Lal and the ball soared over midwicket. It was always going away from me as I sprinted towards the boundary and I overtook the flight path of the ball, twenty yards in from the boundary. I caught a glimpse of it descending over my left shoulder and I was running away from it. I slowed fractionally and managed to hang on to the ball. I knew we had a chance now as I threw the ball into the air. I was almost ecstatic.”